New Survey for Job Seekers
While we at Job-Applications.com like to provide job seekers with the resources they need to gain employment, we’re also very interested in how the general population feels about the job market itself. It gives us a better idea of how we might serve you and allows us to understand what you’re going through in looking for work. That’s why we created a series of surveys that will be posted on our homepage asking visitors to share their thoughts on a few points about various topics ranging from economic outlook, job-hunting methods, and basic demographic information.

Close to 1,500 Participants
Our first survey in the series recently wrapped up and touched on the push for an increase in the federal minimum wage as well as general questions about job hunting and overall attitudes toward the national economy in the coming year. Around 1,500 people gave us their opinions, which is great because it gives us the opportunity to connect with so many of our site visitors in a way that is more than just normal web browsing.

Results Are In
The results were eye-opening, to say the least. We found there was strong agreement among our participants for an increase in the federal minimum wage but strikingly pessimistic or unsure stances on where our national economy is headed over the next year. Many people also think that our economy has still yet to recover, and over three-quarters of those who responded stated they were actively looking for long-term jobs. What’s really remarkable is roughly the same number of people, regardless of outlook, felt they could land a job within the next month. While our survey only polls a certain portion of the population, it’s still interesting to see what people are thinking and what it might mean for job hunting in the near future. Take a look at the full results of the survey below.

Question 1: What type of job are you looking for?

Many times, in recessions and economic downturns, people take whatever kinds of jobs they can get. We asked people if they were currently seeking out long-term positions, summer jobs, or unpaid internships to get an idea of what kind of jobs people were currently in the market for. Overwhelmingly, our users are searching for long-term employment.

Question 2: The U.S. Congress is considering raising the minimum wage from $7.25 to $10.10 over the next three years. Do you support that idea? 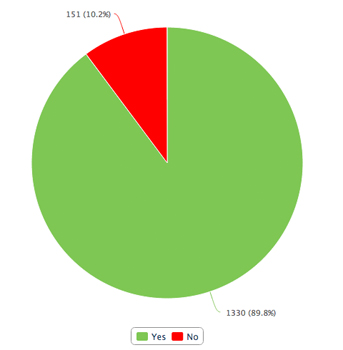 Question 3: How long do you think it will take you find the position you are seeking? 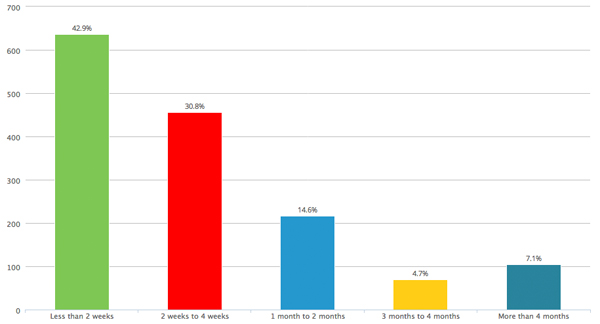 People’s confidence in the economy isn’t always revealed in a yes or no answer to a straightforward question. We asked how long people expected it to take to find work, if actively searching, to get a better sense of job seekers’ attitudes toward current the market. The majority of responses stated expectations to find work in a month or less, with many users confident in getting a job in fewer than two weeks.

Question 4: Regardless of whether or not the recession is over, in terms of your own personal experience, do you feel the economy has or has not begun to recover? 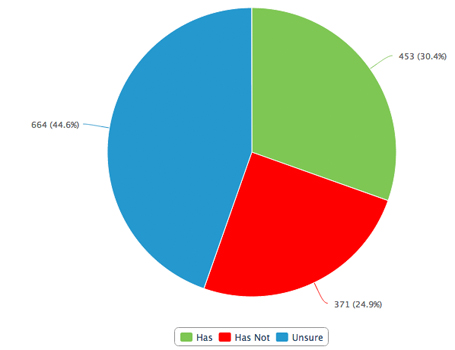 Economics is a complete numbers game, so we posed the question of whether or not the average person feels the economy has recovered to real people. The resulting data should show or give us some sense of how far the consumers of the country feel the nation has come in terms of economic recovery without getting lost in share values and GDP figures. More people think the economy has recovered than those who don’t, but many visitors were unsure.

Question 5: Thinking about the next 12 months, would you say you feel optimistic or pessimistic about the state of the national economy? 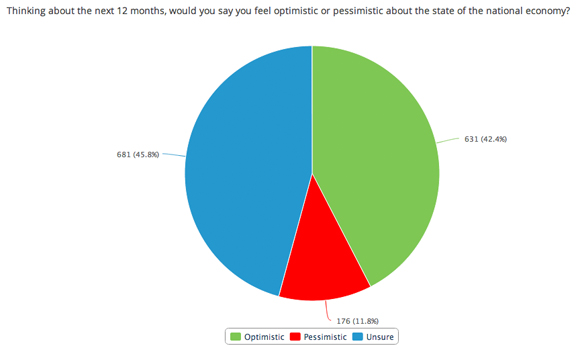 Our final question touches on whether or not people have a positive, negative, or neutral outlook on the national economy. The data should show how participants feel about the present, near, and far-off economic outlooks. Again, many people were unsure about the state of the economy, but three times as many visitors are optimistic than pessimistic about the future in terms of economics and the job market.